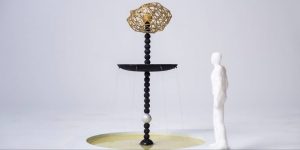 Each of the 11 cities tells another story, has another history and has other characteristics. To include those aspects, the population of each city were involved to inspire the artists. Therefore, the 11 cities formed a fountain committee to collaborate with the artists. With the help of this collaboration, each fountain tells its own story, which is told in the following.

The cloud of Franeker
Franeker is the birthplace of the most important and significant astronomer of the 20th century, namely Jan Hendrik Oort. The French artist Jean-Michel Othoniel dedicated the fountain to Oort and his explanation of the ‘cloud‘. The cloud is represented on the top of the fountain and sprays small water droplets, which drops in the basin underneath it. The basin serves as a waterfall. Both, the cloud and the basin are connected by a chain consisting of dark colored pearls, except of a golden pearl that represent the sun and a silver pearl that stands for the moon.   https://www.friesland.nl/de/orte/4080006293/11fountains-franeker 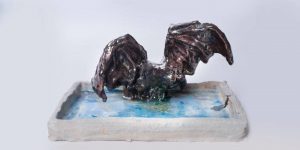 The bat of Bolsward
Bolsward has a bat fountain that can be interpreted with multiple meanings. Referring to the designer Johan Creten from Belgium, he had a sudden image of a bat, while looking at the Broerekerk (church) in Bolsward. Close to it, a huge colony of infrequent bats are counted each year. The meaning of a bat differs depending of the culture. While in Asia, this animal is symbolized with happiness, wealth and blessed with a long life, the western culture perceives it as a dark force and associates it with the night.  https://www.friesland.nl/en/locations/3099930291/11fountains-bolsward 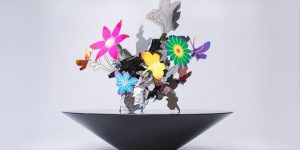 The flowers of IJlst
The fountain in IJlst combines culture, nature and humanity by making use of the Japanese flower arranging art ‘Tachibana’. Artist Shinji Ohmaki from Japan was also inspired by the wild stinzen plants and implement them in the fountain to symbolize the human role within the development. The bunch of flowers contains two various types, such as one part colored and made from steel, and the other part silver and made of polished steel, which shape reminds on ice skates. The water splashes constantly from the bench of flowers into a huge basin. https://www.friesland.nl/en/locations/2481487216/11fountains-ijlst

The horn of Sneek
Is it the statue of Fortuna, the goddess of good? Whose horn stands for fortune and deliver property to everyone, who touches it. But this fountain shows a man, holding a horn while standing on a golden sphere, which rotates on its own axis. The sphere is driven by the water that streams out the horn. According to the German artist Stephan Balkenhol, the man’s facial expression and clothing have a neutral radiation, which trigger people to think about life and what we perceive in life. https://www.friesland.nl/en/locations/1780917551/11fountains-sneek