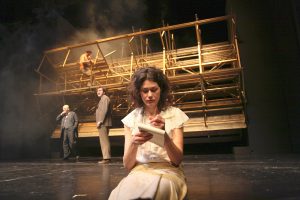 Annemaaike Bakker plays the female lead character in the production “de Stormruiter”, based on a novel by Theodor Storm. “De Stormruiter”, is presented to the audience from September until October 2018 in the WTC Expo in Leeuwarden, which is especially created for Cultural Capital 2018 Leeuwarden-Fryslân. The story themes are the fight against water and the formation of the Friesian Horse. I had the opportunity to get Annemaaike on the phone and talked with her about her life and her love for the theatre.

In person
Annemaaike Bakker grew up close to Leeuwarden. During her school days, she played in youth theatre groups and sang in a choir until she went to theatre school. After finishing theatre school, she started to work as a freelance actress in the Netherlands before she went to Germany to play in an ensemble. Her most favourite memory of Leeuwarden is grounded at the youth theatre.

Passion for acting
If she always knew she wants to be an actress, she disagreed, since she wanted to become everything, from doctor to an archaeologist. She interprets it as an early indication of her passion for acting. Now, she plays for in Bremen and started to love the city, since it perfectly combines the city life with country life. I asked her, if she thinks about coming back to the Netherlands; but she explains that she would work as a freelancer in the Netherlands and in Germany in fixed arrangements which combine dance, acting and singing.

“De Stormruiter”
Annemaaike plays Elke, the wife of Hauke in “de Stormruiter”. This role brings some challenges; first: such a staging needs a different style of playing. Annemaaike says: “I must give the character much more shape and liveness to touch the audience because there is a lot of space between stage and seats. Plus: the project is huge and every evening 4.500 people are expected to watch me.”

Biggest challenge
But her biggest challenge, she states, is the horse riding. “I have never played with animals on stage before neither sat on horseback before.” Which as well makes it exciting, since a lot of tickets already got sold and she still cannot ride. That’s why she takes riding classes next to her preparations such as learning her line’s and reading the novella.

Coming home
Jos Thie, as the director of the play, watched her playing in Bremen and asked her to play Elke. She hasn’t worked with Jos Thie before, which makes her delighted to be a part of it.
For her, it is like coming home and an opportunity to play in her mother tongue. Moreover, “I really look forward to the work with the team.” But especially she looks forward to the rehearsals, since her favourite part of being an actress, is playing. She loves to dig into new worlds and roles and to get into contact with new knowledge and skills she didn’t have before, such as horse riding.
But of course, she is looking forward to coming back to her home for this production and to be a part of Cultural Capital 2018 Leeuwarden, as it still feels like coming home for her. She is curious about all the projects going on and hopes she finds the time to watch some of them.