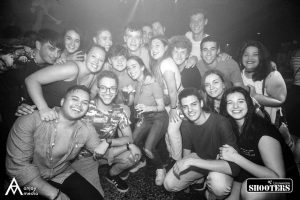 The nights in Leeuwarden are very different than the days. It’s when the night animals come out in all their glory, and that surely is something worth observing. Dutch and foreigner youth alike both disinhibit themselves in the streets that belong to them after sunset. This usually corresponds to Grote Hoogstraat, Oude Doelesteeg and Ruiterskwartier, the three streets that gather pretty much all the night life of the city.

What you can find:

Bars
Despite not having as big an offer as Groningen, there is still plenty to do in Leeuwarden at night. You may find yourself going to bars with different kinds of music to suit your vibe, many even have live bands playing on some occasions. This is the case of Mukkes and Scooter’s, who also have jam sessions in case you find the courage and want to step up onstage! Then there is, of course, Leeuwarden’s own pub street. Oude Doelesteeg is an alley with quite a few consecutive small pubs which are a popular route for pub crawls. This street is usually packed with students and people handing out flyers for 2 shots for the price of one.

Clubs
If you go to the clubs, you have also lots to choose, from the underground feel of 21 to the mainstream of Bascule and Shooters. It is mostly around Oude Doelesteeg and Ruiterskwartier that you are likely to find drunk Erasmus and Dutchies that sometimes mingle, resulting in a funny combination. Clubs in Leeuwarden are usually free or at least cheap, which is a good thing. What’s inside the mainstream clubs is what you will find in most clubs of the similar style: a mix of commercial music and some deep tracks which central Europeans love such as Macarenaor Cotton Eye Joe.

In these streets at night there are some things that never change, though. One is the almost perennial policemen standing in line in front of their vans, watching out and quite possibly laughing at what people do and the other is those portable toilets which are lifesavers, especially when the actual toilets are so close, yet so far.

Food
The last element of the Holy Trinity of a night out in any part of the world is drunk food. When in Holland, you go to Febo, no matter what city you’re in. It’s easy to find because there is always a big group of people outside munching away at their frikandelor kroket. However, Leeuwarden has some delicious places that won’t let you down when the pre-hangover kicks in like Are You Hungry?, which is one of the best burger places in town or Du Nord, very popular for its sandwiches.

All in all, Leeuwarden is not as bad as it seems for a night out as people say. It’s not a major city, but if you’re looking for fun, you certainly will have fun.