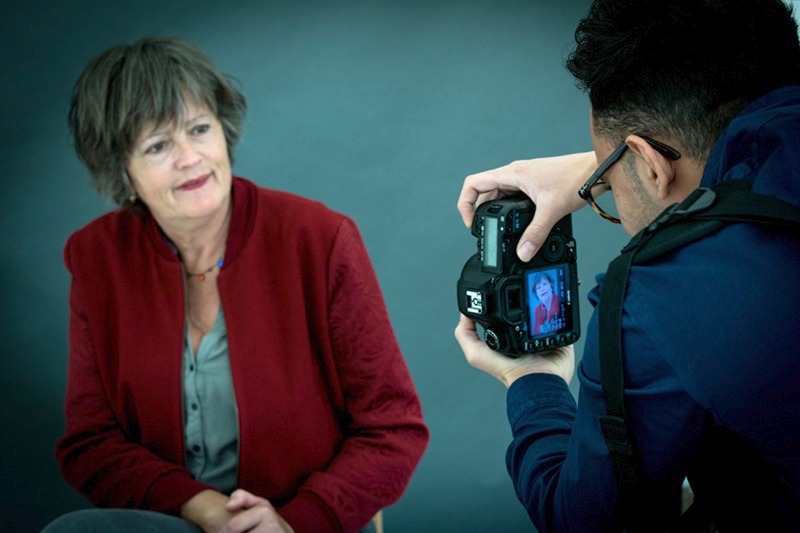 Last year was the first edition of the Fryslân Photo Festival and this year again it was headed in Leeuwarden. Multiple Frisian photographers, professionals and experienced amateurs but also ‘newcomers’, tried their best to bring into vision the theme of this year: ‘Who am I?’.

Connection
These ‘newcomers’ were part of the festival during the participation project. The ‘statushouders’, people who came from another country to the Netherlands, got paired up with citizens of Leeuwarden and together they headed off with a camera. A beautiful connection between these two was created and at the same time beautiful pictures were taken. The ‘statushouders’ made a connecting with the citizens and in this way they felt as they were heard and they hoped to get more affiliation with the society.

Huseen from Syria
Just like Huseen(22) from Syria (see photo). He came to the Netherlands at the start of 2015 and he didn’t speak a word Dutch, but after a hard first year, things got beter. „You learn from difficult times”, he says. A lot of determination was needed, but that was not a problem for Huseen. He got to know new people and wanted to do things. When he heard about the participation project, he immediately knew he wanted to participate. He loves taking pictures and he was very motivated to take action.

Learning more and more
Huseen already learned a lot about photography by watching Youtube videos. Also, he became better by going to festivals to take pictures and he is also permanent photographer at Neushoorn. He says: „The more pictures I take, the more I learn”. This is why he is so glad that he got the opportunity to participate: he learned a lot and gained much experience by working together with his partner and their coach during the participation project. In addition, he is very thankful for getting new contacts. „I met tons of new people and almost everyone knows me. I am heard”.

Barber and photographer
Now the participation project is over, Huseen hopes to work on more photo projects. He also wants to do something with photography in the future. But other than that, he is also a barber, for which he is following an education. Preferably, he combines the two. He hopes to open his own business or work at a known barbershop and at the same time to be a photographer. „I can’t do just one”, he adds.