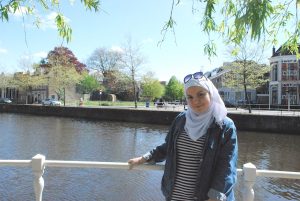 Since 2015 Friesland received approximately 2,250 adult refugees. Leeuwarden houses the majority of these immigrants, about 540. We rarely get a chance to see the journey and difficulties of a refugee through the eyes of one of them. How is the integration with Dutch society, what are the obstacles of learning a new language, work, study. What are the biggest difficulties and what are the best things about living in Friesland. Naimee Alayobi, an 18-year-old Syrian girl told us her story and talked about her dreams and the challenges of starting over in the West.

Whoever looks at Naime does not imagine the responsibility that the girl imposesto herself. With a shy smile and a poignantlook, I imagined finding a young girlwith interests similar to other girls ofher age. But I found a woman determined and aware of who she wants to be in the world.

The arrival
Naimee came to Holland with her family about a year ago. The older brother had arrived months earlier. And after obtaining asylum, he asked the Dutch government for a family reunion visa for the rest of his family. Today everyone lives in Leeuwarden. Asked what she thinks of the Netherlands and the Dutch people, she told that she has only good things to say.

“The Netherlands is a beautiful country. I find it very safe. Good country to live and study. Most of the Dutch people are nice. You can make a lot of contact with Dutch people, but you have to start the contact yourself “, she says laughing.

Leeuwarden reminds her of her city in Syria, though she made reservations about the prospect of refugees getting jobs here. “Leeuwarden is very beautiful. Not too small and not too big. Not too busy and much safe. It is very good to live, but doesnot have many opportunities to work. I have been to Rotterdam and Amsterdam and I can see that the opportunities are greater in larger cities”, she explains.

Dutch way to be
Asked about how the Dutch treat the refugees, Naimee explained that she has no bad experiences to tell. Shefeels welcomed by most of the Dutch. But, some situations are still weird to see. Like the almost religious separation that the Dutch make betweenthe personal and professional life.

“I have a friend whohas a colleague from his work. This lady is really nice during the working hours. Very friendly, but after work time sheis completely different. Outside the office it seems that she does not know you again. It’s very strange”.