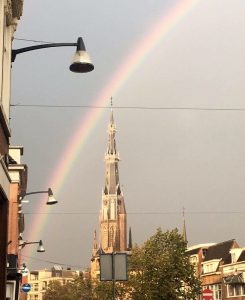 Leeuwarden is a place with an exciting history and future. Talking about bright future of the city in 2013 Leeuwarden was voted for European Capital of Culture for 2018. Therefore, this award is given to a city in which different events will be organized that can boost Leeuwarden visibility.

Weather someone is interest in architecture, tourism or recreation, there is something for everyone.  Mentioning amazing places in Leeuwarden, Saint Boniface church is one of them. The church was designed by Pierre Cuypers who was a Dutch architect. Saint Boniface is one of the tallest churches in the Netherlands. Built about one hundred and fifty years ago, it is a remarkable building in the central part of Leeuwarden.

An airplane and a storm
Saint Boniface is part of the Roman Catholic Diocese of Groningen-Leeuwarden. The church had some interesting moments during the years: in 1947 an airplane hit the top of the tower, in 1976 the top of the tower was destroyed because of a storm. However, nowadays the building is in its full glory and citizens of Leeuwarden are proud of it.
Besides the religious service on Sunday, Saint Boniface is open to the public on Wednesday and Saturday from July till mid of September. For a little bit of money visitors can also climb the 85m high tower and enjoy the beautiful view of Leeuwarden from the top of it.