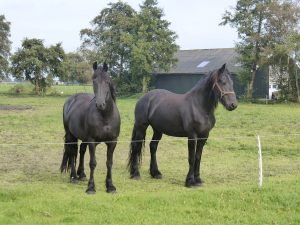 “He is not proud. I was wrong, I was entirely wrong about him. You don’t know him, Papa. If I told you what he’s really like, what he’s done.” This quote from Pride and Prejudice should lead you through this article about the Friesian horse. Further, this quote shows you exactly what we see when looking at the Friesian horse.

Close to extinction
The breed reduced immensely and was close to extinction in the late 18th and early 19th century. However, few farmers gave everything to rebreed the Friesian, which luckily worked through incest. Nowadays, it means for the Friesian horses to go through a tough performance test. You can call it the toughest performance test worldwide. Mainly because an incest factor must be computed, to make sure no foreign blood crosses the breed line. This means that all existing Friesian horses have the same roots.

Statue
Today the Friesian is a popular leisure horse because of their gently and good-tempered manner. In Friesland’s capital Leeuwarden, the statue of a Friesian horse adorns the city. This statue was a gift from Koopmans Meelfabrieken and their 100-years-existence anniversary to the city. The statue represents the Friesian horse ‘Dagho’ and was created by Leeuwarden born artist Auke Hettema in 1981.

Coming back to the quote that started the article, it shows that we should not believe what we see and instead look under the surface to understand the whole story. This story showed you why the Friesian citizens can be rightly proud of their breed, as it is a special one and if people would not have had the faith in this breed it would not exist anymore.