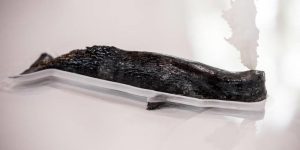 Each of the 11 cities tells another story, has another history and has other characteristics. To include those aspects, the population of each city were involved to inspire the artists. Therefore, the 11 cities formed a fountain committee to collaborate with the artists. With the help of this collaboration, each fountain tells its own story, which is told in the following.

The sperm whale of Harlingen
To begin with Harlingen, which is located right by the sea. The international artists Jennifer Allora from the USA and Guillermo Calzadilla from Cuba, decided to create a fountain in a shape of a sperm whale, based on the Harlingen’s history. Back in the days, whaling belonged to Harlingen’s daily life and was part of their trade. However, nowadays, people stopped whale hunting, instead they save and protect them. It might be possible that this fountain will stimulate people to rethink our behavior within the natural system and its consequences. The water comes out of the whale’s blow hole in regularly intervals. https://www.friesland.nl/en/locations/1933415534/11fountains-harlingen 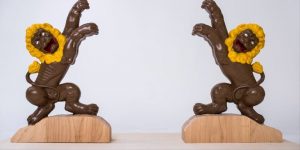 The lions of Workum
The fountain can be referred to Workum’s coat of arms, which shows two lions. However, the artist Cornelia Parker from the United Kingdom had another intention by designing the fountain that consists of two lions. Both lions stand in front of each other with a gap in between them, where the water splashes from their outstretched paws. The meaning of the fountain is to free the lions from their duty as a symbol of Wokum’s coast of arms. Instead the fountain symbolizes the living reality within Workum and can be perceived as a gateway to this reality. https://www.friesland.nl/en/locations/2217264131/11fountains-workum 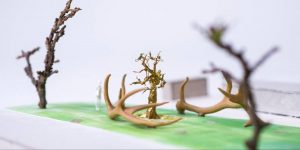 The coat of arms of Hindeloopen
The Chinese artist Shen Yuan, was inspired by Hindeloopen’s coat of arms, especially the myth behind it. The coat of arms contains a tree enclosed by a doe and a stag. This three is referring to the myth a tree of life, which represents life force and wisdom. The roots of the tree point to underworld, while the branches stretch out to the sky. Based on this myth and figures of the coat of arms, the fountain was designed. As visible in the picture, the tree of life is located in the center with birds on it that spout the water periodically. The two antlers that surround the tree, refer to the doe and stag. https://www.friesland.nl/en/locations/3929327060/11fountains-hindeloopen