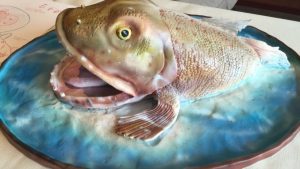 Each of the 11 Cities tells another story, has another history and has other characteristics. To include those aspects, the population of each city were involved to inspire the artists. Therefore, the 11 cities formed a fountain committee to collaborate with the artists. With the help of this collaboration, each fountain tells its own story, which is told in the following.

The fish of Stavoren
Stavoren is well-known for its fishing and the trade, which inspires artist Mark Dion from the United States. Particularly, the drawing of Pieter Bruegel the Elder from 1556, where Stavoren used to be a harbor city. The drawing is called ‘Big fish eat little fish’. Based on that, Dion designed the fish fountain that reminds to the big fish from the image. https://www.friesland.nl/en/locations/2637428034/11fountains-stavoren

The kievit (lapwing) of Sloten
The artists Jorge and Lucy Orta are originally from Argentina and the United Kingdom, together with locals they created the fountain of Sloten. As the lowest as the basis, there are basins, buckets, and jerrycans stacked on top of each other. Those are tools, which are used to carry water and therefore, associate water and its importance in life. Based on that, the water flows constantly through those containers. Above the containers, there is a boy holding a girl, who is standing on his shoulders. In the girl’s hands, there is a kievit, a traditional Frisian bird. The children meant to free the bird, due to Frisian tradition to collect kievit eggs in spring time and the fact that this species is critically endangered. The last symbol is a golden key, which is on the kievit’s back and stands for Sloten and its close communion. https://www.friesland.nl/en/locations/3840888294/11fountains-sloten

The ice fountain of Dokkum
According to the Dutch artist Birthe Leemeijer, the ice fountain of Dokkum is inspired by a picture of Bert Koch from the year 1963, which had a legendary and frigid winter. The picture illustrates an ice sculpture, which was formed in the sloping water. Moreover, the fountain associates the history of Dokkum as a vital port city. A special feature of the fountain, which differ it from the others, is the composition. Different parts of the fountain consist of frozen water. Depending on the weather circumstance, those parts melt and refreeze again. A solar system is used to ensure, that the parts are mainly frozen even in summer. https://www.friesland.nl/en/locations/3982033357/11fountains-dokkum

Love in Leeuwarden
The collaboration with designer Jaume Plensa from Spain started with a meeting with the Director of Urban Development, the mayor and alderman in 2014. Plensa was asked to redevelop the part in front of Leeuwarden’s station, including the fountain. The fountain is the entrance of Leeuwarden, when arriving with bus or train. It consists of two heads, male and female that are facing each other. Both have their eyes closed and have a relaxing and dreaming aura. They are placed on black colored platform, where mist cloud is arising. Plensa was inspired from the mist, which he saw on the Frisian fields every morning. https://www.friesland.nl/en/locations/3485605413/11fountains-leeuwarden