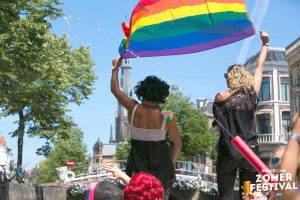 Have you heard? On May 26ththere will be a Pride Parade in Leeuwarden, the capital of culture! To find out more about this event I reached out to Talitha Broersma who is one of the organizers of the event.

Talitha informed me that even though organizing Pride Parade is her job, she connects to the event on a personal level. “For me personally, I know what it’s like to not live your own true self. That is my personal initiative to organize such an event, to bring out happiness in yourself and spread it.”

History behind
The Pride Parade in Leeuwarden is only counting a few years. When it was started, the name of it was GayStraight Parade and it was not actively promoted; however, it was still something people wanted to be a part of, therefore the event promoted itself. Each year, the audience grew with the Parade together, each year it became bigger and bigger. Even in the first year of it, the number of people attending surprised the organizers since they did not expect such a huge amount of people to show up.

Everyone is welcome
If you want to know the feeling of the Pride Parade and the atmosphere of it, you should know that it is all about joy, love, peace and freedom. “I think PRIDE stands for that feeling you get when you are all warm and fuzzy inside. Do not be ashamed when you dance, sing or just being quirky. The atmosphere is open and welcoming. Happiness is what you see and feel everywhere. Everyone can participate, whether you are purple, straight, gay, transsexual, bisexual, yellow, student, rocker, old, young. Diversity is celebrated, and freedom is the key!”

This year
Since the first year the Parade was started, a lot has changed. This year the organizers of the event are working together with Frysk Straat Festival and the location if it will be the Mata Hari square. This year there are a lot of organizations involved in the event such as the Neushoorn, the Markies, Dizz, Doll House Stage, students, teachers, the melting pot, COC and they all share the same goal – to spread love.

On May 26thyou can be there and be a part of creating a world in which people love and celebrate everyone’s diversity. To find out more about the Pride Parade 2018 Leeuwarden, head out to: