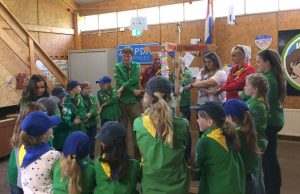 Burmania, part of the Scouts Netherlands, is one of the oldest and largest Christian scouting groups in the country, being located in Kalverdijkje, Leeuwarden. Having over 180 children, Burmania is the place where fun meets learning, as boys and girls between 5 years old to 18 years old get to do exciting activities every weekend.

Respecting the Code of Scouts, Burmania’s leaders are making sure children get the best experience: having fun by connecting to each other, respecting the values and traditions of scouting, having the greatest adventures by exploring the nature. Furthermore, activities such as baking pizza, making a campfire and having annual summer camps, are forming the kids by challenging them, and developing their team skills and creativity.

Romanian scout
Burmania is welcoming scouts from all over the world, as Beatrice (photo: in white shirt), a Romanian scout, who is currently a student in Leeuwarden, has been a leader for the children for over a year. Being part of this scouting group made her feel like home, and despite the language barriers, the children welcomed her with open arms: “I felt like being in a family, because Burmania is actually a family rather than a group. I felt excited when I saw that children, and even the staff, tried to make me feel welcomed. Once, at a dinner with the scouts, they called everyone at the table, and because I couldn’t understand Dutch, they tried their best to speak in Romanian, just so that I could feel included. Burmania is something special in my life!”