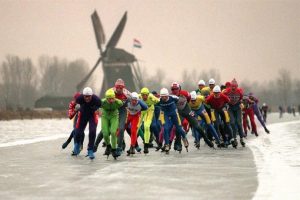 A winter time is here again and every Frisian wishes only the same – let Eleven cities tour (Elfstedentocht) come to alive. For the ones who don’t know, Elfstedentocht is ice skating race about 200 km long. Through canals, rivers and lakes of 11 Frisian towns take part various participants. There are ones who want to just enjoy the race as the leisure time activity and the ones who really want to participate in this legendary race. Usually they are 16 thousand people but the finish line pass only one percent of them.

Unfortunately, there is a “small” problem. And that problem measures 15 cm, what is the thickness of the natural ice on the track that needs really true winter weather and freezing conditions for the race to be held. Despite of global warming the Tour of the tours couldn’t be held for 21 years! Last tour was organized in 1997.

Small miracle
The small miracle came 6 years ago when the track was very almost ready! Although, the ice wasn’t thick enough in the southern part of Friesland. Tour of the tours was held only fifteen times, even though thousands of people are hoping for this dream tour come true again.

Stamps
On the track skaters must collect a stamp in each city and be in a finish line before midnight. The tour starts in Leeuwarden and continues to Sneek, IJlst, Sloten, Stavoren, Hindeloopen, Workum, Bolsward, Harlingen, Franeker and through Dokkum. The finish line is back in Leeuwarden.

Winner
The winner of the race goes indelibly down into history. As a matter of interest, the first race at 2 January 1909 was won by Minne Hoekstra with the time 13:50 and average speed 13,7 km/h, the last winner Henk Angenent from 4 January 1997 had the second fastest time 6:49 with average speed 29,3 km/h in the race history.
Will the Ice Queen come to Friesland to wake up the winter and hear the pleas of all of the waiting fans? Let’s cross fingers and hope for that!