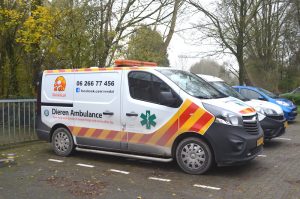 As part of their student experience in Leeuwarden, Emmi (21, from Finland) and Leonor (20, from Portugal) went on a full day of work with the Animal Ambulance that takes control of animals in distress that require emergency medical care.

Animal Ambulance is a non-profit organisation based in Leeuwarden and run by volunteers. Emmi and Leonor talk about how three volunteers were working there the day they visited as part of their projectweek. One of those volunteers was in charge of the telephone, and sends all information to those in the ambulance, who drive to the point where the emergency is.

The ambulance
The day Emmi and Leonor worked with the organisation they covered several emergencies, one of them was a found stray cat that had to be picked from the street. This was a lucky case as the cat only needed light medical attention and a place to stay.

“It was a little cat; so we drove there and picked him up from the street. He was a little bit frightened but the volunteers handled the situation quite well” – Leonor

Not all animals are that lucky, sometimes the volunteers have to deal with picking heavily injured animals or the ones that could not make it and deceased. This happened that day, all the other calls received, were in relation with dead animals being found.

The experience
To both Emmi and Leonor the experience was really impressive and even though they faced a huge language barrier, they were really impressed about the work and the situations in which the volunteers were involved and how professional they had to be; after all, some people misunderstand how involved and hardworking you have to be in an organisation like this one.

“I really liked the experience because I had never worked in that and it was more like an animal shelter, but they actually rescued animals and were really active. It was really pleasant and all the volunteers there were really open, they showed us the facilities and it was quite nice” – Emmi

Both of the girls agree that this was a emotional experience and they really enjoyed it, but would not recommend it to anyone not willing to dedicate their hearts and souls to these animals.