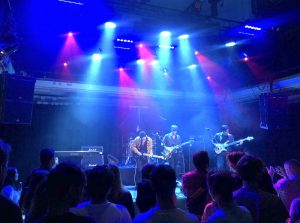 What had been Final Roar and Final Call last year, has now become one, Final Jam. The Music Management minor of Media & Entertainment Management NHL Stenden and the Student Council of Creative Business decided to collaborate to create an unforgettable evening on the 20th of July, outlined by a large variety of different national and international musicians. To give you a little insight behind the scenes, YourPost talked to the organizers and planners of Final Jam.

When asked about how the idea to collaborate occurred, Jaap van der Meer, coach and module coordinator of the Music Management minor explained: “Since last year, both, the showcase of our musicians as well as StuCo’s Final Call Event were a huge success, we thought ‘why don’t we just combine these two events this year, to make it to one unforgettable night”.He goes on explaining the initial idea behind the event: “It is a showcase of the artists the students have been working together with over the past eight weeks. It’s the last step before their final presentations”.

Starting with The Lucid Dreams, a soul and jazz band from Leeuwarden, Love Less an indie-rock band from Aruba, singer songwriter Thalie and her beautiful RnB and soul songs and lastly, Moor Park a pop/rock band from Amsterdam, the line-up of Final Jam was filled with talented artists from different music genres.

Ligia Bonini, first year CB student and team leader of the StuCo working group, points out the quality of the artists: “They really gave us a great performance! I was surprised with how professional everyone was. I truly enjoyed working together with them.” Sanny Stoit, second year CB student and also team leader of StuCo’s working group, goes on “The Music Management minor did a great job choosing the artists and I think the audience really liked them too.”

Although, the work behind the event “definitely pays out,” Sanny remarks, Ligia also explains the difficulties when organizing such a big event: “In the beginning, it’s always difficult to combine all ideas, we were a lot of people and everyone had their own expectation of how the night was supposed to be. Still, I’m happy with the turnout and even though it had been stressful, I also had a lot of fun organizing this event. Sanny: “For Li and me it was the first time to plan such a big event and we definitely learned a lot. In the end, we managed create an amazing evening.”
The two students go on explaining how important it is to maintain good communication and organization, Ligia: “Without the support of our team, this wouldn’t have been possible. On behalf of the two of us, we want to thank everyone that has been involved!”

From teachers, to students, everyone was free to join and the audience truly enjoyed their time, Ligia: “It is the perfect night to round of the study year. For most of us, this is the last time to celebrate together before the summer break and I’m glad that we had the chance to make it to such a special evening!” “In the end, it’s all about having fun!” Sanny adds.