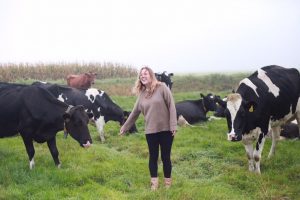 Leeuwarden is known as the capital of the prosperous, agricultural province Fryslân. A province with nearly 3.000 dairy farms and more than 280.000 dairy cows. Fryslân is the home of the Frisian cow. Fryslân’s economy is sustained by agriculture and tourism. As international students, we have plenty of opportunities to experience the cultural and social life of Leeuwarden but that does not really cover what being a Frisian citizen means. To get to know more about the traditional Frisian households, two international students experienced living in a cow farm for a weekend and shared their thoughts about those days with us.

Sooah, from South Korea (22) and Sara, from Spain (21) had not experienced the farming life before coming to Leeuwarden, so when given the opportunity of living in a farm they didn’t hesitate. Back in their countries they both live in big cities in which agriculture doesn’t hold the importance it has in Fryslân. Moving here was a complete change for their lifestyles but this change could be pushed harder with this experience.

School project
The reason why they got to live there was a school project, in which they filmed what being on a farm was and also what the work of a farmer is like. The project turned out as a beautifully down film which would make anyone wish to be a farmer, thought the reality of the farm is quite hard and requires a lot of effort and hard work.

Renske’s family hosted all the students
Renske is a Dutch student in NHL that has been raised and lives in a farm in Sneek, this is not unusual among Frisian people taking in consideration the popularity of agriculture. Renske is classmate of Sooah and Sara; at that time they were working at the same project, “film making”. During the project Renske offered to give her house as part of the setting and they ended up spending one night in the farm.

“The experience of living in a farm was great, I had never been in a real farm and had never milked cows and I learned a lot. I had to clean the shit and all and even if it sounds disgusting I loved it, it was a great experience and well, I love animals” – Sara

Daily routines
During their stay in the farm of Renske, they had to behave as real farmers and were welcomed by a Dutch family that included them in their daily routines as one of them. For Sooah, the smell of the farm reminded her of a Korean meal she doesn’t like at all. To her the smell was familiar which impressed the Dutch family.

“They wake up really early, about 4-5am because they have to milk in the morning, which was fun. They do it with a machine, Renske’s dad taught us how to use it and it was actually pretty easy” – Sara

The different tasks in the farm
Among the multiple things they did, milking and taking care of the cows was just a little part of their routine, one of the things that they enjoyed the most was visiting the corn field, in which they tasted the corn and had fun taking pictures and hiking around. We wanted to know what their reflection on this experience was and they both agreed that Leeuwarden and Fryslân should make farming experiences part of their tourism strategy, that everyone should be able to know Dutch families and share a little part of their lives with them.

“I would recommend everyone to be in a Dutch family home, even if it’s not a farm. It’s really nice and also the food is really great” – Sooah.