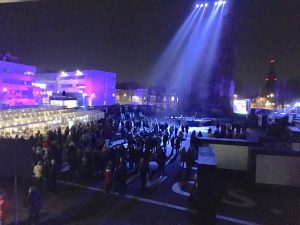 Leeuwarden, as one of European Capitals of Culture in 2018, has ended its glory and transferred the title to next two cities which are Matera (Italy) and Plovdiv (Bulgaria). On November 25th, I went to attend the event which was ‘Slotavond ReOpening’ at the Oldehoofsterkerkhof.

Together
When I arrived at the leaning tower, there were already a lot of people gathered on the public square. Some of them lined up to get hot wine and sugar bread, and some of them were talking to each other near the fire. There was a big screen broadcasted a live talk show, and the topics they talked about were looking back at 2018 and what would Leeuwarden be like in the future. That’s why the name ReOpening was chosen.

Many events were held
It was cold that night, but people were still willing to join and stayed together. I thought it was sweet because people tried hard to promote Leeuwarden to the world in this year, they hold many interesting events such as Giants, MC Escher at the Fries Museum, etc. There were events every week, even every day! When I went to city center in the weekends, the streets were always crowed. And now the people just stood next to each other, enjoying the moment. It seemed like:” We made it!”

Retain Features
I arrived in Leeuwarden on January 27, 2018, so that means I could participate the whole year of cultural capital program. I don’t know what Leeuwarden looked like in the past, but I do know this special year and I am looking forward to the future.

As we know, Leeuwarden is in the north and it is so cold in winter so not many people want to visit the city. Besides, people used to think the residents are farmers here. After through this year, I believe some people have changed their thoughts.

No difference across the countries
Leeuwarden is a typical Dutch style city, but also embraces many different cultures. One of my friends said she was surprised how friendly people were when she came here. People didn’t look at her in a strange way. She told me when she walked on the streets in other cities, people usually stared at her and gossiped because she was Asian.

Show the world Frisian style
Sometimes when we want to show the best to people, we only focus on new things and forget about what we had already. As I see it, Leeuwarden remains faithful to its traditions, it doesn’t lose its charm in order to get attention from people, on the contrary, people promote what they have, who they are and improve it.

Residents should be proud of themselves. Now people from outside the province are familiar with Leeuwarden, they are aware the residents are not farmers at all. They are Frisian.