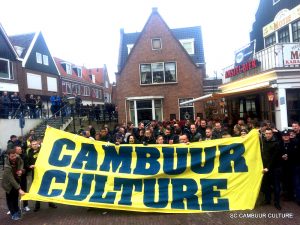 Everyone in and around Leeuwarden knows about Cambuur Leeuwarden. The local football club with an iconic stadium and her loyal supporters based in Leeuwarden for more than 50 years. But there is more to Cambuur than just the players. No, there are the supporters who form the spine of the club and are always present. Whether it’s going good or bad or whether the weather is nice or not. Today I sat down with Johan De Vries a board member and co-founder of the supporters club called: ‘Cambuur Culture’.

A short but rich history
But the relationship between Cambuur Culture and the club wasn’t always that good. In 2008 when Cambuur Culture started as weblog they sometimes posted critical articles about the club. Since Cambuur is a club of the people of Leeuwarden they felt that the management back in the day didn’t know what the club was all about. They forgot about traditions and the habits that make Cambuur, Cambuur and they forgot about the supporters. A couple of years later Cambuur Culture converted into a foundation, started to gain members and went from a weblog to a club organizing events, defending the rights of the supporters and optimizing the experience to visit a match through fireworks, flares, banners, and flags.

Guarding the club
Cambuur Culture has grown out to a club with more than 600 members. Mostly from the north stand of the stadium which also known by the M.I. side and ever since their official founding they have done a lot of things to make sure that the authenticity of the club is safe. They made sure that the club didn’t change the original Cambuur weapon, but they also were deeply involved in the removal of unsafe fences Their vision is that people should experience Cambuur as the old school club that it is without being conservative.

If you are interested in Cambuur Culture and see everything they did for the club you can visit their website cambuurculture.nl. This is also the place you can become a member.