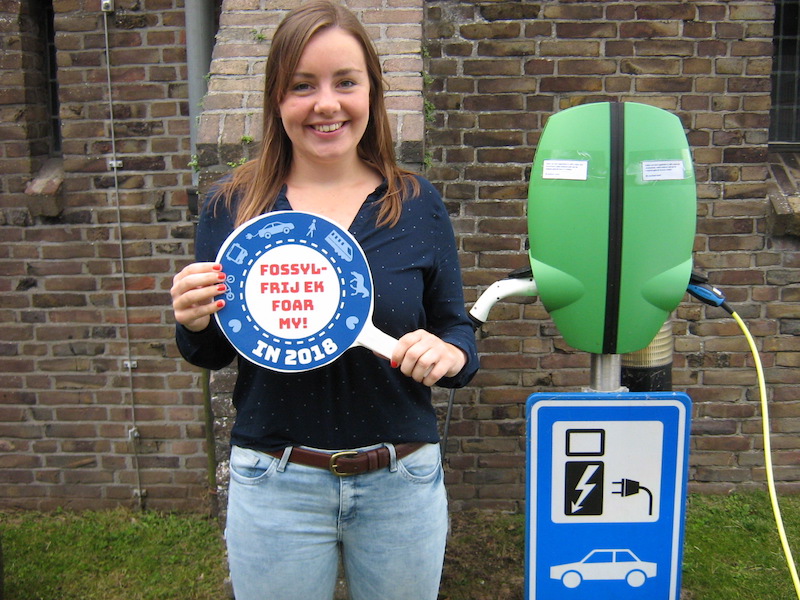 Madelon van Kempen, born in Brabant, has been promoting sustainable transport for years. She hopes to stimulate as many people as possible to follow her example. For a while now, she is heavily involved in the Elfwegentocht; two fossil fuel-free weeks planned in Fryslân from the first, till the 14th of July, 2018.

Sustainability has always been an important topic for Madelon (24). Due to this, it was no surprise that she chose for a study in applied environmental sciences at Van Hall Larenstein in Leeuwarden. Through her studies, she was exposed to many sustainable initiatives. “During my first year at Van Hall I was a part of the student-panel regarding a sustainable Fryslân,” says the student. “Not long after a teacher told me about the sun-boat team from Van Hall & Nordwin. The team was recruiting new members. I saw this as a great opportunity to supplement my studies. Not long after I joined the team we won the Sustainability-Award, for having designed the most sustainable boat in the world. That was really Kick-ass!”

Elfwegentocht 2018
In the past couple of years, the Frisian youth has been trying to make a stand on fossil fuel-free transportation in the province. They were heard, and the idea has now been picked up, and implemented into the Cultural Capital 2018 program. Due to this, as many people as possible will be transporting themselves completely fossil fuel-free. All Frisian traffic will be dominated by electric cars, boats, greengas-busses e-bike’s and other sustainable forms of transportation.

When Madelon heard about the project, it instantly triggered her enthusiasm and curiosity. “During my internship, at the Nordwin College in 2016, I got involved in the project through a fellow student. She explained the project to me, and told me the team was going to explore how Frisians think about these two fossil fuel-free weeks. This initiative appealed to me, for it is a bottom-up project: not only intended for the elite, but for all Frisians. During the conversations with the locals we mentioned that – when they do not possess a sustainable vehicle to transport themselves with – they can borrow one at various locations. The responses to this concept were very positive. When you give people the means, they are more than willing to participate. I hope these two weeks will help people realize the importance and the viability of sustainable transportation.”

Truly Frisian
Madelon may be born in Den Bosch, but this doesn’t devaluate the love she has for Fryslân. “By now I feel like a true Frisian. Originally I am from Brabant, but I carry a tremendous amount of pride for this province. It is so cool, that we as Frisians will be part of promoting sustainable transportation to the entire world.”

Madelon mentions that she understands the importance of this project. “It is of great importance that not only we, but also the next generations can enjoy this beautiful earth. Transportation has a lot of influence on that desired future, especially here in Fryslân. People oftentimes live rather far from each other. This makes it very tempting to just hop in the car and go. It is especially this, what I desire to change. There are so many possible alternatives nowadays! Look at the sustainable Flirtino-train for example, which will be transporting people from Leeuwarden to Groningen and back in the near future. It’s becoming easier to transport yourself sustainably every day. In this day and age, sustainability has become inevitable.”