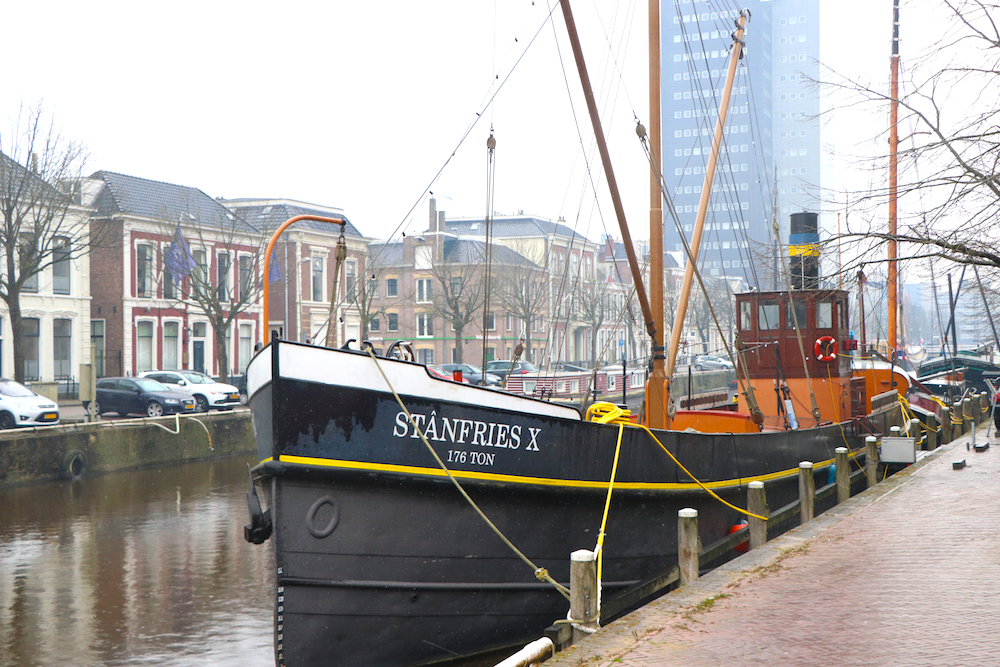 You might have seen her, floating in the Frisian Canals. This ship is known in Leeuwarden due to her use presence in the annual arrival of Sinterklaas, expositions and other cultural activities. The Stânfries X is one of the few ships left of a period in which most cargo was transported over water. A period of trade between Holland and Friesland in which every now and then a ship sunk to the bottom of the Zuiderzee. A period that started for the Stânfries X in 1912, in Groningen.

History
The Stânfries X’s built commissioned by the Leeuwarder Stoomboot Maatschappij and was the tenth and last in the series of Stânfrisians. The ship was used by many shipping companies to transport cargo and passengers on the line Leeuwarden to Amsterdam and Rotterdam. With the build of the Afsluitdijk, the Stânfries X kept moving cargo over the Waddenzee when the Ijselmeer was completely frozen in the winter.

But after the Second World War there was more competition for the Stânfries X due to the rise of other forms of transportation over land caused by improved infrastructure. To battle the competition, the Stânfries X was lengthened with 5 meters and a new engine was installed in order to transport more cargo. But eventually the Stânfries X went, due to lack of employment, to a ship breaker in Hendrik-Ido-Ambacht. Afterwards the ship went to the Port of Rotterdam where it functioned as a workingship and then she was sold to a merchant who used her for the storage of ship parts.

Rediscovery
After being beaten, the Stânfries X was saved from demolition by the Frisian Bank in 1997. They saved her because she was one of the few ships left of the period that was crucial in the cultural-historical development of Leeuwarden and Friesland. But because of the worsening economy and after the acquisition of the Frisian Bank by Rabobank, the Stânfries X did not have a safe haven. Therefore, through Foundation Stânfries and Foundation Fryslân Boppe Oranjewoud, The Stânfries X was donated to the Foundation Museum Harbour Leeuwarden, of which it is until this day the flagship.