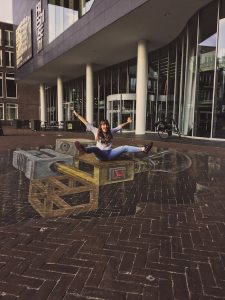 Hello! My name is Tania and I am from Spain. I have been an exchange student in Leeuwarden for one month already, and I still can remember the day I arrived here.

When you think about the Netherlands, the first image that comes into your mind is Amsterdam, the city full of beautiful canals. Not so many people know or visit the north of the country. Even the Dutch people have a misconception about it: they think that in the North, people live on farms, surrounded by cows and grass. So this was what I was expecting to find when arriving in Leeuwarden.

On the 17thof August, I arrived in Eindhoven and took three trains to get to Leeuwarden. What was my surprise when I found a crowded train station and an even more crowded city centre. I remember telling my boyfriend: “This is not as dead as I imagine! There are people and good ambiance here!”

When I arrived at StudentStay after being dodging people through the city with all my three suitcases, I finally found out what was happening: The Giants of Royal De Luxe.

The Giants of Royal De Luxe

This festivity was for the first time in Leeuwarden this year because it is the Cultural Capital of Europe 2018. It attracted a lot of people, and I can imagine why. In Spain, there are also parades in Carnival or the Holly Week’s processions, in which big sculptures and a lot of people get together into the streets. But I have never seen anything like the Giants. I was scared and excited at the same time. How something that big can fit into a relatively small city? There was a moment when the Giant almost collide with a roof! I do not have an answer to the question, but it was a unique experience that I am not going to forget.

When the festivity ended, all the people left Leeuwarden. I thought: Oh, now it is as dead as I imagined! But nothing further from reality: in Leeuwarden, there is always something to do. There are a large number of activities, and every week there is a festival or special event. Sometimes I even feel overwhelmed by such many things to do! But that makes me realize that I have still a lot to learn and discover from Leeuwarden, and that we can do it together. So join me on this adventure.  Let’s explore and discover all the secrets from Leeuwarden! 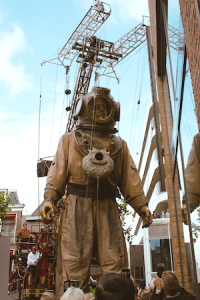