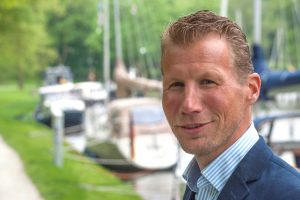 The variety of the fountains
To begin with the aspects that distinguish the fountains from each other. As mentioned in the second part of the 11 fountains article series, each fountain tells another story. Based on the collaboration with the locals and designers, and the inspiration of the city’s history, each fountain differs from each other, by shape, meaning, material, look and artist, who designed it. Fountains are made by wood, steal or concrete. Some streams water constantly, others in regularly intervals. The aggregate states of the water differ as well. Some have water in liquid state and stream it, others have water in a solid state, or gaseous as steam. The international well-known artists are mostly form around the globe. All in all, each fountain addresses another target group, which differ in interest, age and origin.

The connections
Hulsman emphasize also the several connections that arise through the fountains. ,,Everything is connected”. Of course, all 11 Frisian cities are connected with each other and therefore, it can be connected to the Elfstedentour (11 cities tour) as well. Besides that, Hulsman stated ,,each fountain is connected to the city’s history and something modern”. Therefore, the 11 fountains are equal to the city’s inhabitants and people, who will visit them. Consequently, the aim of the fountains is fulfilled. ,,Making Friesland and its cities to one union by art”.

Why did you choose fountains?
,,It was clear that water must be included in the project, since Friesland is a watery place. Besides that, the project should create a spot and meeting point, where people get together, meet and connect, such as the 11 fountains connects the cities in Friesland”. Moreover, the location is easy to reach. For instance, the fountain in Leeuwarden, will be placed in front of the station. It will be easy reachable for people, who travel by train or bus, and it is also close to the city center. The fountains’ aim is to trigger people to visit also the other cities and make the Elfstedentour (11 cities tour) to see Friesland. It is not a project for a moment but more for the future, where events will take place. The expected big opening is in May 18, 2018.

Why did you include international artists?
,,The eleven chosen artist are mainly international and well-known. The idea was to appeal people, who either like their work or come from the same country, to visit their artwork. International artists see the Frisian cities, as well as their cultural background from another perspective”. Therefore, artwork is created, which is outside the box. Even though the artists come mainly from foreign countries, the aim is to produce the fountains mostly in Friesland. For instance, the fountain in Workum is produced in the city itself but the artist is from London.

Let’s be surprised and curious for spring 2018!