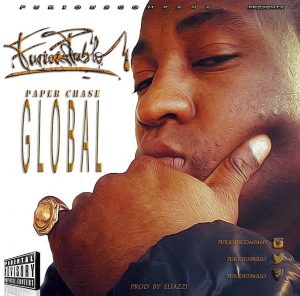 LEEUWARDEN – A Congolese with brilliant talent from Leeuwarden Furious Pablo is a hip-hop artist from Leeuwarden, originally from Republic of Congo. His positive intension is to reach out to the people all over the world through his music. Be a musician by nature and passion.

Through his music and art work, Furious Pablo attracts to people of a highly sensitive nature, who appreciate creativities in a positive way. His music was the emotional connection to the barbing and art work, with each channelling a different type of creative impulse that makes him stand out. All of these talents –being a musician, artist and barber at heart– are modes of his expression.

Furious Pablo, can you tell us something more about yourself and your hobby? And your real name?
,,The sound of music is unexplainable to me: I am always listening to music, it became an everyday thing. Also it connects for me fashion, drawing and barbering, so I always see music in my art even when music does not play. My real name is ‘Furious’.” (Laugh)

Can you tell us how you are dealing with the music, art and barbering?
,,Music, art and barbering all came naturally to me and I guess it is a gift for which I am so thankful to the almighty. I combine those three modes by being creative all the time. Back home one time, when I looked at the sky, I saw figures and all I had to do was point my finger to the sky and try to connect them together. That’s how I was drawing in my mind. It all comes naturally as far as barbering. When I look at people I try to figure their symmetry, you know what I mean? As if their heads are really corresponding to the hairline and such. Being an entrepreneur really inspired me to combine many gifts at once and continue to be creative and turn it into business.”

How did you start with music?
By listening to the radio until one song came up and was sounding totally different than the rest. After doing a little research I found out that the thing I had listened to and could not get out of my mind was called ‘hip-hop’. From that moment I started to wait patiently in front of the radio with a cassette tape to record anything that was going to sound like that mysterious sound called ‘hip-hop’.”

How many songs do you have now in total?
,,A lot … I never counted them maybe more than four hundred … I just recorded a new song yesterday, and I was live on Facebook while in the studio, and that song had people talking.”

Do you have any show coming up in the city of Leeuwarden?
,,At June10th in the Harmonie Leeuwarden, it going to be on fire. I am there live and direct.”

What inspired you in Leeuwarden and in general to be a hip-hop musician?
,,Myself, I had to be my own inspiration in Leeuwarden because when I got here, hip-hop artists were not as rampant as it is today. The kind of hip-hop that I was brought up with has inspired me to make similar music, because I felt a possibility to do so, or even do it better than what I was hearing on the radio at that time.”

How can a hip-hop artist become known in Leeuwarden?
,,By making good music that the people want to hear and present it on attractive way to an audience that actually is interested in that genre of music.”

Do you have any message for your fans?
,,Keep supporting Furious Pablo and follow me on social media for many more surprises and good news for you at all time.”