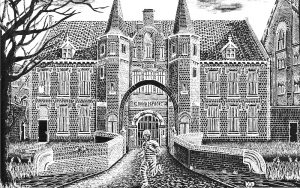 Despite Leeuwarden’s size compared to other Dutch cities, it has interesting music places in almost every corner, a combination that is perfect for developing a solid music scene. Blokhuispoort probably hosts the most peculiar of all venues in the Frisian capital. Once you go through the stone arch that hosts the main entrance of the building, you walk across the first courtyard where you can find a café and the library above it, if you glance to the left. Carry on to the second courtyard and in the further left corner you will see the entrance of Asteriks. Although this might be hard to believe, up a spiral stone staircase, almost claustrophobic, you will find… a concert hall.

A quasi-theatrical venue
The entrance of Asteriks is through a barred metal door which indicates the ancient purpose of the building. The room used to be a recreational space for the inmates, where they would host plays, concerts, sports… Considering the building is roughly 500 years old, it is kind of spooky. You can easily imagine how the wretched prisoners dragged their feet between the stone cold walls, who in a simile would now be the tipsy spectators at one of the many shows the venue hosts weekly. Nowadays, the stage dominates the room, which can hold up to 150 people approximately.

This venue’s beauty and charisma obviously come from the building where it is located, the Blokhuispoort, a 16thCentury building which was used as a prison until this century. The building now holds a library, a café, a restaurant, the Frisian Design Factory and, of course, Asteriks. It is also the headquarters of the game company Grendel Games.

Another day in the office
On Record Store Day’s eve, Friday 20thof April, the city of Leeuwarden was quite liven up. There were many concerts going on in town and one of them was Iguana Death Cult at the Asteriks. This was a perfect example of a run-of-the-mill soirée at this curious place. This garage rock act had Asteriks wearing out the rubber of their soles. The young three-piece from Rotterdam are a really fun band to watch live thanks to their mix of colourful melodies, even approaching pop at times I dare to say, and punk infused pace all along their set. They faithfully represent the essence that Asteriks wants to bring to its boards, new fresh sounding bands from Holland and sometimes from abroad that have the edge that complements so well with this dream venue.

Regularly, Asteriks holds concerts during the season from September to June. Their policy is that the tickets are 7,50 € for a three-band bill. Also, many students are involved in the project, especially those who study Media & Entertainment Management.

For more info, visit their website to check out concerts, news and related stories at: www.podiumasteriks.nl