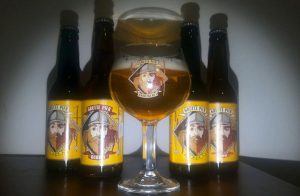 Pier Gerlofs Donia, known as Grutte Pier, is a Frisian rebel and freedom fighter. He lived in the time period around 1480- 1520 and grew up in Kimswerd, near the seaport Harlingen in Friesland, where he used to be a farmer. His appearance was explained as massive, tall as a tree, strong as a horse, broad shoulders, with a long beard. Once, the violent military force Black Band under the leadership of George, Duke of Saxony, attacked Kimswerd. Tragically, Pier was affected. His ground was burned and his wife was killed. The tragic loose and the immoral attack changed Pier to a revenge seeking rebel, whose anger drove him starting a rebellion against the oppressor of his homeland. This saga inspired Frans Filius, founder and brewer of the Leeuwardener beer brand Grutte Pier. Discover how the saga of legend Grutte Pier is revived by the taste of beer.

Grutte Pier – a beer that represents the Frisian tradition and Filius’ passion of craft beer. Filius start was only a few years ago. ‘I used to be a home brewer, until I was asked from a craft bar to brew beer. Once, I started brewing, I asked other bars to sell my beer.’ That was the beginning of Grutte Pier in 2014. Over the years, the brewery expanded and the beers’ exceptional taste was rewarded several times with the best beer award.

In a barrel
A particularity is ‘The beer I brew is definitely craft beer and some of it is fermented in a barrel’, which is uncommon in the brewing process. ‘My main focus is the northern part of the Netherlands, particularly the Frisian tradition. Thus, my aim is to attract people in the north being more enthusiastic in craft beer and sharing my passion about craft beer.’

What is the connection to Grutte Pier’s saga and what is the meaning of the logo?
As seen on the picture, the logo shows a face with two different halves of a bearded man, similar to a Viking. ‘The logo refers to Grutte Pier. The left face half demonstrates Pier as a calm farmer and sweet husband, which is emphasized by the malt in the back. While the right face half shows Pier’s bitterness, when he became a rebel. Both sides of Pier’s saga are represented in the taste of my beer. You can taste the malt in the beginning, followed from a bitter end.’

Own creation
‘My new creation is called Brettûne. The name consisting of two words, arises from the way how it was made. The first part brett is the Dutch name of the wild yeast that is used as an ingredient, while the second part tûne is Frisian and means barrel. Brettûne’s special feature is the additional fermentation in a barrel and its unique aroma, caused by the added wild yeast and the oak barrels, which adds a Vanilla aroma and of course oak barrel flavor.’

What is kuit?
‘Kuit beer is an old traditional beer recipe from 1407. Typically, kuit is made with 45% malt, 35% barley, 20% weed and hop from the Netherlands. Since I am passionate for craft beer and enthusiastic in the Dutch history, I tested brewing kuit beer. The outcome was remarkable, which motivated me to create a kuit as a new creation. The kuit beer will be a double bock and is available soon.’