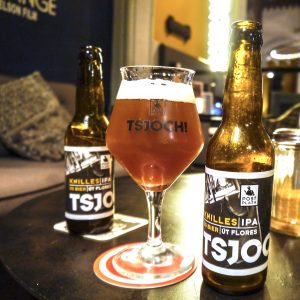 De Kroon op Leeuwarden is a Leeuwarden beer brand. Ulco de Jong, brewer and finder of De Kroon op Leeuwarden, combines his passion for craft beer and the old beer history of Leeuwarden in his creations. ‘I just started with a simple beer kit three years before’. That was the beginning of taking on the crown. In 2014, De Jong started brewing each week and mixing different flavors. Only one year later, he officially started brewing his first beer, a house beer with rosemary, which won a price for the best house beer in the Netherlands.

Where does the name De Kroon op Leeuwarden come from?
‘The name of my beer was inspired from an old brewery in Leeuwarden from the 19th century’. De Jong is interested in the history of Leeuwarden, particularly, the history of beer in Leeuwarden. He told the story of the decline of breweries in 1800, where the city counted more than 40 breweries. After the decline only one brewery was left, called De Kroon aan het Noordvliet, which was then forced to close as well. De Jong was inspired by this story, and revived the last brewery in this history by naming his beer similar De Kroon op Leeuwarden. Therefore, the crown was passed on and De Jong is glad that the name of his beer has a connection to it.

Craft Beer Creation and its Idea
Cambier, a craft beer creation that has also a connection to the old history of Leeuwarden. The name of the bright blonde is a mix of the two words: Camminga and Bieroproer. Cambier is a luscious combination between hop and kuit (mixture of herbs). While tasting Cambier, ‘you will taste sweetness and something fruity, following from the bitterness’ stated De Jong. This taste can be referred to Leeuwarden beer war. The sweet sin drinking the forbidden beer from breweries outside of Leeuwarden until the bitter moment of getting caught.

What is your main focus?
In regard of his beer, De Jong explained ‘My main focus are the two beer sorts, Cambier and Kammeraat’.  Further, he stated ‘Kammeraat is a strong and heavy beer, which won a best beer award for its outstanding taste. For my future, I would like to create more beer varieties, recipes, mix flavors and develop another house beer. As well as become bigger, but still focus on craft beer.’ That is what he emphasized during the interview, to focus on craft beer and contribute the Cultural Capital City Leeuwarden 2018 with tasteful beer creations. Besides that, he mentioned ‘I also would like to share my passion of craft beer’.