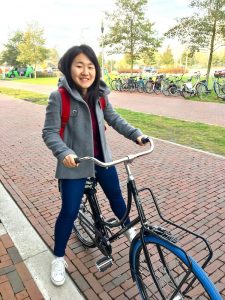 I heard that Dutch people ride their bikes a lot, but I couldn’t imagine how big it is until I arrived at Leeuwarden.

Complete biking paths
I was really surprised that there were so many people riding their bikes in the streets, even the kids. Besides, there were paths for biking and not just one or two, but everywhere! In Taipei, we usually ride the motorcycles instead of bikes, and we only have few biking paths in the city. It is more dangerous to ride a bike on the road than here, because you need to ride with lots of motorcycles and cars.

point the direction
Another reason I was impressed is that you need to do the gesture to point the direction when you change the way. It is so cool for me since I have never done such thing in Taipei.
I started to rent a bike in September. In the beginning, I was afraid of riding on the road, even it was biking path.

High level bike
First of all, I am only 154 cm tall and the bike is too high for me, though the bike shop staff told me it was the lowest one in the store. I can’t reach the ground with my feet when I stop, and I can’t just sit on the bike to ride either. I must jump on when I start to ride and jump down when I halt. Which confuses me because if I want to go somewhere, it’s better not to stop and arrive directly,  or it will be annoying for me and other people because I need to take my time to restart again. Maybe I should buy a children’s bike.

Foot brake
Second, people here tend to use foot brake instead of hand brake, which I am so confused because I often forget how to stop my bike without hand brake. As a result of this, I crashed accidentally into my friend and it happened to me twice. Fortunately, we were all good, no one injured in the end.

“Professional” biking skills
Third, despite a lot of biking paths, I still need to be aware to ride in the path. Even though I don’t have to worry about the cars, because there is less risk in Taipei. But the point is there are more people ride the bikes than In Taipei, and they are “professional” riders since they were little. People can ride the bikes with just one hand, riding the bikes at same speed, and the most dangerous action I have never ever seen before is riding the bikes without both hands!!!
I try to get used to the biking environment, and I think I will also become a great rider before I go back to Taipei.