Gerd Dijkstra is a local entrepreneur, who runs Cafeteria Goudenregen, kite shop Vliegerzone, teaches Filipino and Indonesian martial arts delivers mail and practices sustainable lifestyle. His house is completely powered by green energy, and this part, he explained to me how sustainable living benefits his family and the community.

Gerd’s interest in sustainable energy stems from his youth and he started practising it out of necessity. Now he advocates sustainable lifestyle because he wants to empower people to be independent of non-renewable energy sources. “When we first bought our current house in Leeuwarden, we used to get a massive energy bill. It was a big building, so we had to pay about 480 euros every month. The energy situation inside the house was terrible – it was the coldest house I’ve ever lived in. Therefore, I did some isolation and energy projects, and now we have our own self-sustainable house. We barely use any external energy anymore, and we flush only with rainwater. This has something to do with the money, but the general idea is also to be independent of unsustainable energy sources – gas, oil and fossil fuels. The same is with our boat, where we use only collected energy and water, so being independent is bigger than just money.”

Switching to green energy is self-sustainable
Gerd also told me that people often lag in switching to the green energy because it seems too expensive, but they fail to see the long-term benefits. “For us, it all started with investment into three panels, then I got six, then nine, twelve, twenty and so on (laughs). Collecting green energy is addicting. But the most interesting part is that all the upgrades come from the saved money. For example, the first solar panels saved me around 900 euros. From those 900 euros, I did new energy things. Following year it helped me to save 1200 euros. I’ve reinvested them and bought more solar panels. Essentially, I invest the money it saves me back into the system, so I keep on upgrading. That’s the smart way to handle it. Now it came to the point that I sell and help to install solar panels. When you take money from non-sustainable sources to install renewable energy, then the system starts to sustain itself. And that’s how it should be done.”

Recycling and reusing also saves energy
Energy is just one way to look at sustainability. Dijkstra family also reuse, give away or sell items for reuse. “In our cafeteria, we sort all kind of things for recycling: cans of coke, the oil from the snack bar and paper; later on we bring it to the recycling points and get paid for it. Also, all the food leftovers go to the compost which I use to amend soil for my plants. Amongst my plants, I grow sunflower seeds and peppers, which then I dry and feed to my parrots. It’s not a lot of course, but everything little contributes. Instead of throwing away, we give away food buckets from the snack bar, so people use them again. By recycling and reusing, we also produce less garbage. Before, the garbage truck had to clean our containers every week, but now it only comes every two weeks. As a result, the garbage truck now has to drive less, and we reduced our bill from 200 to 60 euros. So essentially, it works on two sides: financial and public interest. People forget, that it also takes fuel and energy to, for example, make a bucket, so they must be aware that the general idea of reusing and recycling is bigger.” 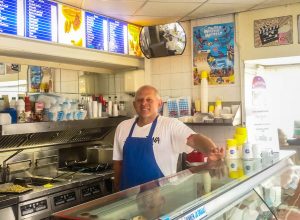