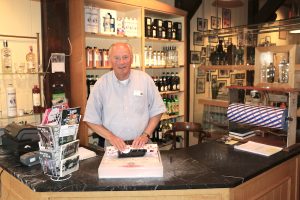 In the centre of Leeuwarden, close to the leaning tower Oldehove, you can learn about one of the city’s and the regions prides: the liquor called Beerenburg(er) and the Boomsma brewery. The brewery has been around since 1883. The museum however opened in 2004. Here you find information about the history of the liquors, the brewery and the Boomsma family who started and still runs it. ,,Dirk Boomsma is the founder and now it’s the fifth generation who is in charge”, says Jan Thies, guide at the museum.

The Beerenburger
The original drink that Boomsma is famous for is of course the Beerenburger. Even though it might be the most well known it is not their biggest export. ,,It’s far from it. But it is the one drink that all the international tourists who come here wants to taste. It’s our basis and people are very curious about it”, says Jan Thies.
The guide shows you all of the different machines used in making of the Beerenburger, some of their ingredients (they won’t reveal them all) and also the other products such as vodka, whisky and wine. To get more insight in the making of the Beerenburger we are presented with a 10 minute film where the former owner Jodocus Boomsma is explaining more in detail about the process of making Beerenburger.

Tasting during your visit
During your visit you also have the chance to do a tasting of their different products, of course you should at least try the Beerenburger. ,,During the summers we have a lot of visitors and groups that comes for the tastings. Already this afternoon we have a group of fifty people”, says Jan Thies.
For the people in Leeuwarden is the museum more of a liquor store than an actual museum. Jan Thies explains that they come to the Boomsma museum to buy their liquor over the counter.
,,They usually don’t want the Beerenburger, but they buy all the other products instead”.