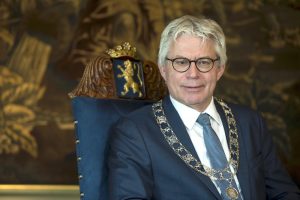 LEEUWARDEN – Mayor of Leeuwarden, Ferd. J.M. Crone hosted Eric Blomqvist and me at the city hall. We had a chance to talk about students and many other things. According to the Mayor students are a big part of the city and they are so important for the atmosphere in Leeuwarden.

As we know there are four universities in Leeuwarden. So, there are more than twenty thousands students. What do you think about the students? Are they really important and a big part of the city?
,,I am very proud that we have a very good system in universities and other schools, etc. We have a lot of international students: more than two thousand. That’s important because they bring energy to the city. I think, that’s very nice. If you see students are around, walking, doing sports, going to have a meal with their friends, working and of course studying sometimes. Frisian people have always been people looking inward to their own history but also open to the world. Also, Frisian people are traders. So, we like people from other countries”.

How is your relation with international students? We know every semester, you come together with new international students. So, how is it?
,,Well, I think, it’s important to meet them as Mayor of the city and give them a presentation with a warm welcome. Also, to tell them something about the history and the future of the city. I know, it’s kind of a shock to go to some other country and study in there. Just like every other country, we are special. We are open and direct society. Some people say ‘impolite’ for this. So, it’s good to have those meetings and listen student’s experiences”.

What are the pro’s of Leeuwarden and the Netherlands for the students?
,,The Netherlands is a very open and international oriented country. We earn 75% of our income from trade and not just trade of the products but also trade of goods and commodities. Also, we are in a high level of scientific  knowledge and we have very good universities in our country. Most of them are in the top-100 universities list. Furthermore, schools in Leeuwarden – like Stenden – have a very high number of international students. Always, you can speak and discuss in English but also you can learn many other languages. Of course, you have to adapt the system how it works in here, but also you should keep your own roots with you”.