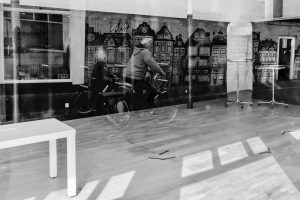 LEEUWARDEN – ,,I’ve always been fascinated by any kind of technology and art, obviously photography is a perfect combination of these two disciplines. Photography has many facets and art photography is only one of them. A camera can be a powerful tool for a great many works. I continuously try to explore all the facets of photography and keep learning,” says Robert Vartanov.

Since his childhood, Robert Vartanov is interested in photography and fiddling around with his camera. Almost every day he can be seen walking around Leeuwarden, capturing different moments of life. The information technology manager from Georgia, now living for almost 20 years in the Netherlands, is an art lover. He would like to be able to paint paintings. However, as he never learned how, but knows technology, he combined the two and started making art through photography. For him photography is a spontaneous type of art, as he has to capture things within a quarter of a second. For the last five years, Vartanov is taking his passion more seriously and established his own website as well as many different social media channels, on which he has an impressive number of followers to whom he showcases his work.

Street photography
Vartanov mainly engages in street photography, as he is interested in human condition and life in general. His photographs picture everything you can possible see in daily life. However, within 99 percent of his pictures a person is depicted. Nevertheless, for him even a picture without a human still says something about life as almost everything, especially within the city, is related to humans. His pictures are diverse. Sometimes they are serious and sometimes they are humorous. Nonetheless, they always make a common moment seem special. But why does Vartanov love street photography so much? Well, street photography can be very ambiguous leaving the interpretation to the viewer. For him it is all about the art of capturing a moment and letting the viewers fill in the story.

Debut book
Since he thinks of photography as a spontaneous kind of art he also tries to stay spontaneous with his vision. His favourite picture is the next one. ,,When a picture is done it loses its appeal as something precious to me” says Vartanov. His obsession is the next picture, as taking a picture feels more valuable than the picture itself. However, he has one clear idea for the future: publishing a debut book of his work and continuing capturing special moments of humans as they never become boring.