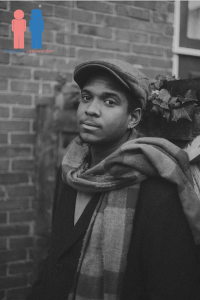 We are happy to introduce to you our first story about an emerging musician living in Friesland. Patrick Ricao is a singer/songwriter whom I met around three years ago.

Originally from Aruba, ever since he was a little child Patrick would make music – he tried and played a wide range of instruments, from accordion to a guitar.

,,I didn’t have a good relationship with my dad, therefore I thought that playing a guitar would be a good opening for communication and bonding. At some point, I was in Aruba to see him, because I thought it’d be the last time that I’d get to bond with him. But I accepted that it would never happen, because the last thing he wanted was for me to be a musician.”

Nowadays he is focused on making music that ‘makes you feel good’ – and he does that by combining elements from various music genres, such as blues, jazz, funk, soul and many more.

Pat is also part of Friesland Pop, which is an organization that aims to improve the Frisian pop climate. He has had the opportunity to perform live on various events in Leeuwarden.

,,I want the audience to be fully in the moment. I don’t care about that ‘cell phone bullshit’ and people being distracted. My mission: every time I play, I want the crowd to remember me and that exact moment (what they felt at that moment), I want them to have a meaningful, enlightening, and positive experience. I think that by now my music is perceived exactly the way I want it to be, which is seen from the feedback in which all the points that I am trying to achieve are being mentioned.”

When asked about how he decided to move to Leeuwarden, Pat laughed and answered the following:

,,There was an Aruban musician that studied M&EM and I saw pictures of him in Studio Hitfabryk. At that point, I was studying in Groningen. And then I just went for it, really. Going from Groningen to Leeuwarden is a big change. Groningen is a city made for students. Coming here felt like a step back but it slowly turned into a city with a lot of hidden treasures. It’s not that I fell in love with the city, but it really felt like I met and made my family here.”