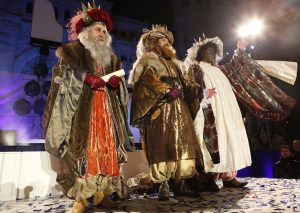 One of the perks of being an international student is breaking the feeling of being homesick when you get visits, I was fortunate enough to be visited by my mum, dad, sister and my three year old niece. Martina loves Christmas, every year she helps her dad and mom decorate the Christmas tree and makes really detailed letters to the three wise men, that give presents to Spanish kids when they are good during the year, but this year, for the first time, Martina got to experience a different type of Christmas.

Sinterklaas is coming to town
Martina arrived to Netherlands a day after Sinterklaas delivered all his presents for the Dutch kids, she had never before heard about this man.

For those of you that as Martina don’t know about Sinterklaas, every 5th of December him and his loyal assistant Piet, come from Madrid in their boat to deliver presents and sweets for every good kid in the Netherlands.

On the other hand, Martina knows the three wise men; Melchor, Gaspar and Baltasar. They come from the west in their camels, following a star and every 5th of January, they parade around Spanish cities to later bring presents to every Spanish kid.

The reaction
“Auntie, can you tell Sinterklaas that I’ve been really good and that I started school?”

This is one of the things Martina said to me on the phone before coming to the Netherlands, the only thing she wanted from Sinterklaas was snow; she wanted to see the snow in Amsterdam as she had never seen it before. On the 7th of December, we woke up to a white view of the city from our window; apparently Sinterklaas also listens to Spanish kids.

As probably every kid, Martina loves Christmas, she tries to behave as well as she can during the year to make sure she would be compensated by the three wise men in January. I had the opportunity of sharing a little chat about Christmas with my niece, and this is the opinion of a three year old about Sinterklaas and Dutch Christmas.

“It is cool that they (Dutch kids) also get presents, he (Sinterklaas) can’t go to Córdoba because we don’t have rivers in the city”

She refers to the canals and how in our city, Córdoba, there’s not boat or sailable waters. For her, one of her main concerns was if I was able to get presents as the wise men probably don’t know I’m not living in Spain during Christmas.

In the end, Christmas is about hopes and wishes and it doesn’t matter which country you’re from or what tradition you follow, Christmas is in the end, the perfect excuse for us to unapologetically appreciate those around us and share with them our time.