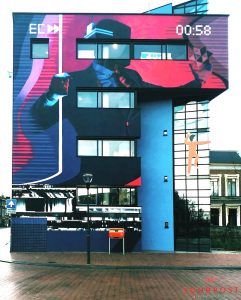 Whether you call him Earth Crusher, Dréor simply Marc-André, for his friends, this man is one of the most famous artists on the Montreal scene. He finally got the name Earth Crusher from the song Earthcrusher by Mr. Lif. He started painting on highways, railways and trains in the western districts of Montreal in 2003.Earth Crusher first started painting with his friend Eric Clement, who wrote “Syphs”, and their friends Russ Jamz and Dekoy from the hip-hop music band Side C. Subsequently he meets Five Eight (or better known as Five8) and from then on they continue to paint together.

Earthcrusher and Five8
The artwork that is being presented on the wall of the municipality in the Nieuwestad. is the work that bears the name “Fast Forward”. The two artists decided to honor M.C. Escher, born in Leeuwarden, by including the polyhedron known as Escher’s Solid (which appears in his work entitled “Waterfall”). The design for the mural depicts Earth Crusher, a futuristic professional hominid who stands for economic strength and the aspiration of the present for the future. The main theme of the design is Escher’s “Solid up in reverence”, a symbol of the mathematical, astrological and creative achievements of Leeuwarden. The design is viewed from the perspective of a digital screen, the common medium that transmits information from around the world to our eyes.