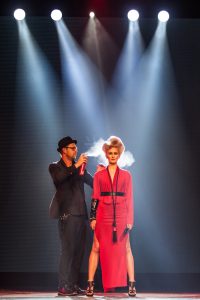 LEEUWARDEN – Richard Jordan is a hairdresser and travels all over meeting the stars of the world. Even after all the glitter and glamour, he still works in his own hair salon in Leeuwarden. ,,That’s my base.”

Jordan is living two lives. He has his life as the owner of a hair salon and at the same time as ‘creative director, ambassador and show artist’ of an American cosmetics brand called Faroek. ,,Two of my colleagues and I are responsible for the colouring. We decide Faroek’s trend for the coming year. We show this in shows all over the globe.”

Dance
A hair show is a massive happening with a huge amount of work behind the screens. ,,It all starts at home with sketches of the models who will travel with us on tour. The models are required to dance. We not only want the hair, make-up and clothes to be perfect, you want the entire show to shine on the catwalk. My wife Anna helps me with this. She is a model, dancer and choreographer.”

Richard shares images of a Faroek-show in Cancún in Mexico with an audience of three thousand people. On the podium, amongst the beat of dynamic music and dance spectacle, he cuts and colours his models whilst voicing comments. However, he emphasizes, Leeuwarden is his base of operations. That’s where Richard started at the age of seventeen as a member of an original hairdressing family. It is here where he can connect to his costumers. He finds this connection very important.

How to improvise
He would however, not want to miss the shows… ,,Don’t think the shows are always as glamorous as they look. At one moment you’re on this massive stage in Amerika, the next thing you know you’re in a little theatre in Eastern Europe with cold water and a tiny washbasin. That’s when you learn how to improvise. At a photoshoot in Curacao, we couldn’t use our curling irons due to a difference in voltage. We dressed the models hair in rollers and decided to drive them around in a jeep with their heads out the window. It worked! The curls came out fine.”

Signatures
With local models he hackles over haircut and hair colour. ,,The Italian models don’t like short hair and those in Belarus like to colour there dark hair platinum blonde. Sometimes you have to compromise.” Richard has had shows in New Orleans, Houston, Fashion Week New York and the Miss Universe competition in Moscow. ,,My real fans are in Poland and America. In Warsaw signatures and selfies took up two hours of my time. But if you think you are a star in this profession, you’re not going to make it. You are as good as your last show…”