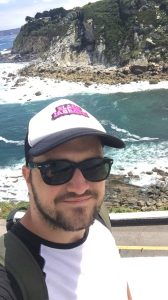 I arrived in Leeuwarden on January 26th. Prior to my Erasmus application, I had never heard of the city or even Friesland for that matter, so I didn’t really know what to expect. I read in forums that students here had a wonderful time, but I was unsure whether this tiny northern Dutch city would suit me, what would the people be like and a thousand other questions that were flying through my head. It was already dark when I set foot outside the station and the first thing I saw was a whole set of party-like lights and decoration. It was indeed the first of many times I was going to hear the words “Cultural Capital of Europe”.

First impressions of an unknown place
When I arrived to my apartment, my flatmates told me that Leeuwarden wasn’t exactly pretty, which was kind of a bummer. Nevertheless, the following morning I was proven otherwise by the cute little city centre which, for a foreigner, seems typical Dutch with the canal dividing the main street into two. But the nicest of all surprises was the kindness of the people, and their willingness to go out of their way to help. I even feel guilty when I ask someone for directions, interrupting their work, and they end up walking with me to the actual place and wishing me a nice day after. If you are a Dutch person reading this, just so you know: you’re the only ones in Europe that do it, and it is much appreciated.

Mingling with the locals
Dutch in general, and Frisians in particular, are a curious kind. On one hand they are extremely proud of their history, although sometimes it didn’t turn out as expected, for example, the Oldehove, which was meant to be the largest cathedral in The Netherlands but ended falling shot and being just a short crooked (but cute) tower. Still, they talk and laugh about it, which shows their laidback way of living. On the other hand, every Dutch I have encountered speaks fluent English, which in my opinion is a really good way of measuring the culture and education of a given society. Dutch society, I think, is a clear reflection of the Dutch people. Here in Leeuwarden, everything is clean because of the ecological awareness the people have. Coming from Spain, this is a happy surprise. Another cultural shock is travelling for kilometres and only seeing flatness and impressive manmade canals, which locals normally overlook.

I have found out many things about this little corner of the world, but I have the feeling I still have to discover many more things from it, specially when Spring starts, to enjoy the beauty of Frisian landscapes.