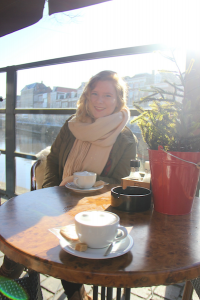 Let me briefly introduce myself. My name is Lydia, I´m from Germany and a second year Media and Entertainment Management student, currently living in Leeuwarden. Even thought I grew up in a relatively small city close to the border, I haven´t been to the Netherlands often. Thinking back, everything I thought to know about the Netherlands was that they make great vla and these super delicious caramel cookies, which I know now are called “stroopwafels”. Besides this, I thought it would be just like Germany. Well, I was wrong.

My experience
When I moved to Leeuwarden almost two years ago, I did not experience a culture shock as it is pretty similar to the one I´m familiar with. Nevertheless, I recognized some differences I want to name. Firstly, starting with the obvious, there are bikes everywhere and I wouldn´t even know how to survive without one. Besides that, Dutch people are pretty strict with the regulations concerning riding your bike as well. Moreover, before I got here, I did not even know that there was a fine for riding your bike without the light on at night. Guess what, there is. And an expensive one as well. Also, when taking the train, you get controlled almost every time, which is not really a thing in Germany.

Connected to this, when I first took the bus, I was positively surprised of how friendly the driver and passengers interact with each other as when someone leaves the bus it is common to thank the bus driver. One thing I was sceptical about first is that it is very unusual to pay with cash. In contrast to Germany, where you cannot pay with card at some places when it is below a certain amount of money, it is typical for the Netherlands to ban the usage of cash. Therefore, at some cafes or when taking the bus only cards as a payment method are accepted. As I said before, I was sceptical first, but I came to appreciate the benefits which come with it as you do not have to worry about taking cash with you at all times in case you want to buy something which might not overcome a certain amount.

Looking back, considering the little knowledge I had about the Netherlands, one impression I got very early on was strengthened even more when I came to Leeuwarden: Dutch people seem to be experts in baking! Unlike in Germany you can even get you favourite pastries on Sundays as shops are open on all days.

Favourite place
I couldn´t point out one specific place which I consider my favourite one. In my opinion, the beauty of Leeuwarden lays in all the small details such as the architecture, the small cafes, standing side by side right in the centre of Leeuwarden allowing a great view on the gracht (canal) which runs through the city and the parks which can be found at each corner. Moreover, I would recommend to grab the bike and get a little outside of the city as you can find beautiful little paths along lakes and fields with sheep or cows standing on it while you see ships passing by. Lastly, a small tip on the side, the library at the Blokhuispoort is a great place for students to do their work.